I used to have two hot water bottles and a blanket 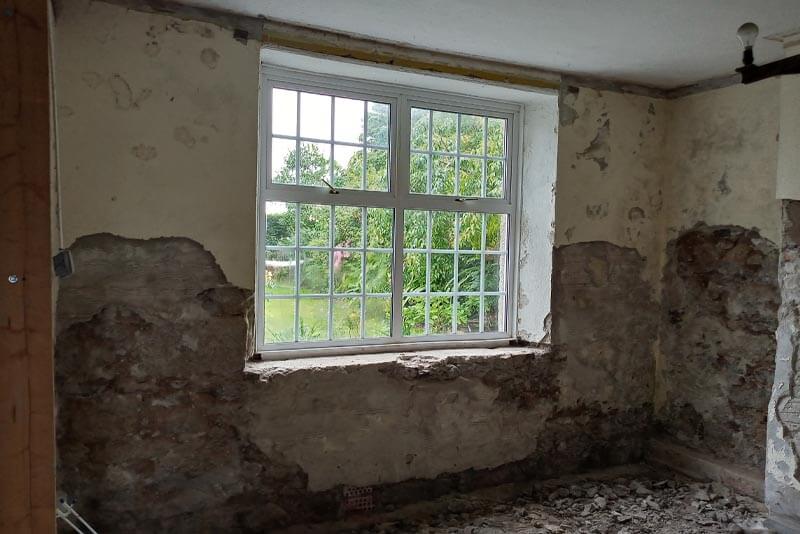 “I used to have two hot water bottles and a blanket over my legs when watching tv. I lived like that for 10 years because I couldn’t afford to finish the work. Now I have my house back thanks to Building for Humanity.

While working full time, Sarah from Camborne in Cornwall, started renovations to remove crumbling plaster on her 200-year-old home. However, tragedy struck and Sarah was involved in a life-changing accident.

Left unable to work and unable to pay for the renovations to be completed, Sarah was confined to a single downstairs room in her home.

She said: “It’s a very old, cold, damp house. The old rotting floor had been ripped up and the crumbling plaster had been taken off the walls and replaced with tarpaulin.”

A couple of years ago Sarah had central heating installed, running off gas bottles – but due to the integrity of the house it was too costly to run.

Sarah explained: “Any heat from the wood burner in the kitchen just escapes, and I couldn’t afford to keep replacing the gas bottles. The house was freezing. I was starting to believe that my house would be like this forever. It has been horrible living like that in those conditions.

“One day, I had a leaflet posted through my door from Building for Humanity. With nothing to lose, I called them about the internal and external wall insulation.

I couldn’t believe how simple the process was. On the same day I received the leaflet I called the team, went through a few simple questions to check my eligibility, and within days I was approved.

Just a few short weeks later, the workers arrived to carry out the improvements.

Sarah said: “I thought they would take one look and leave – but they didn’t. Dave from Building for Humanity said ‘we don’t have problems, we have solutions’. And he was right; four days later my house was transformed.

“The team just got on with it. I have never seen a group of people work so hard. They never stopped. I am so grateful for their help.”

Sarah said her health conditions, worsened by cold environments, have also been improved since the work was completed.

She added: “My home is so much warmer and quieter. I didn’t realise how much of a difference having insulated walls would make.

“There’s more work to do, but now I can visualise it getting finished. I don’t have holes in my wall covered over by a tarpaulin anymore, and I don’t have spiders! I can keep it cleaner, and more importantly I can take my coat off indoors.

“I am totally overwhelmed. It has been life changing and Building for Humanity have given me my house back. The heating is now a lot more effective and I don’t need the hot water bottles to watch tv!”

“ I don’t think Building for Humanity realise how life changing it has been. I have already recommended them to lots of people.”

Building for Humanity are now trying to access funding to get a ground source heat pump for Sarah to help her heat her home for less.

Have You Checked Your Eligibilty Yet?

Are You Eligible For Help Improving Your Homes Energy Efficiency?

Improving homes throughout the UK
Utilising the latest trend in modern methods of construction and clean technology.